More Categories for the Adjectives Starting with I

imperturbable: unable to be upset or excited; calm

insidious: proceeding in a gradual, subtle way, but with harmful effects

–     sexually transmitted diseases can be insidious and sometimes without symptoms

interim: in or for the intervening period; provisional or temporary

inveterate: having a particular habit, activity, or interest that is long-established and unlikely to change

illustrious: well known, respected, and admired for past achievements

imaginative: having or showing creativity or inventiveness

–          he is making imaginative use of computer software

intelligent: having or showing intelligence, especially of a high level

inventive: having the ability to create or design new things or to think originally

international: existing, occurring, or carried on between two or more nations

interesting: arousing curiosity or interest; holding or catching the attention

inspiring: having the effect of inspiring someone

instantaneous: occurring or done in an instant or instantly

idyllic: like an idyll; extremely happy, peaceful, or picturesque

–      an attractive hotel in an idyllic setting

immense: extremely large or great, especially in scale or degree

–      dining in an immense restaurant

–      an impressive view of the mountains

–      the waterfalls are incredible

inviting: offering the promise of an attractive or enjoyable experience

insensitive: showing or feeling no concern for others’ feelings

–     he is always insensitive and insulting

irresponsible:  not showing a proper sense of responsibility

–      it would have been irresponsible just to drive on

irreverent: showing a lack of respect for people or things that are generally taken seriously

–      she is irreverent about the whole business of politics

irritable: having or showing a tendency to be easily annoyed or made angry

intractable: hard to control or deal with

irrational: not logical or reasonable

irresolvable: impossible to solve or settle

icy: covered with or consisting of ice; very cold

intolerable: unable to be endured

isolated: far away from other places, buildings, or people; remote

ideal: satisfying one’s conception of what is perfect; most suitable

immovable: not yielding to argument or pressure

invincible: too powerful to be defeated or overcome

invulnerable: impossible to harm or damage

impenetrable: impossible to pass through or enter

–          his impenetrable defense against the striker of the opposing team

impetuous: acting or done quickly and without thought or care; moving forcefully or rapidly

incalculable: too great to be calculated or estimated

incontestable: not able to be disputed

–          their victory against the defending champion is incontestable

–      an intense match between the teams

impeccable: (of behavior, performance, or appearance) in accordance with the highest standards of propriety; faultless

inseparable:  unwilling to be separated; usually seen together

irresistible: too attractive and tempting to be resisted

icy: covered with or containing or consisting of ice

iffy: subject to accident or chance or change

inky: of the color of black ink

inst: in or of the present month

ictal: of or relating to a seizure or convulsion 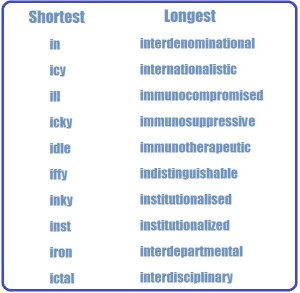 interdenominational: occurring between or among or common to different churches or denominations

immunocompromised: unable to develop a normal immune response usually because of malnutrition or immunodeficiency or immunosuppressive therapy

indistinguishable: not capable of being distinguished or differentiated

institutionalised: officially placed in or committed to a specialized institution

–        had hopes of rehabilitating the institutionalised juvenile delinquents

institutionalized: established in practice or custom; established as part of an official organization

–        the danger of discrimination becoming institutionalized

interdepartmental: between or among departments

interdisciplinary: drawing from or characterized by participation of two or more fields of study