Interesting Categories for the Adjectives Starting with Z

This article focuses on those which start with the letter Z. Aside from listing out the adjectives, the meaning and an example regarding the proper usage of the adjective are also included. These categories can be of great help to those who want to improve their vocabulary and learn about new adjectives that they can use in their everyday speech or writing.

Adjectives that Start with Z

zenithal: relating to or located at or near the zenith

zionist: relating to or characteristic of a supporter of Zionism

zymotic: relating to or caused by infection

zonal: associated with or divided into zones; relating to or of the nature of a zone 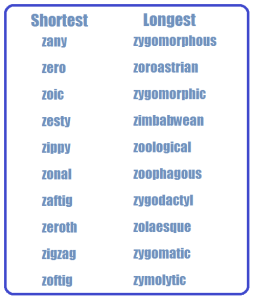 zero: indicating the absence of any or all units under consideration

zoic: pertaining to animals or animal life or action

zesty: marked by spirited enjoyment; having an agreeably pungent taste

zonal: associated with or divided into zones

zeroth: preceding even the first

zoftig: (of a female body) healthily plump and vigorous

zygomorphous: capable of division into symmetrical halves by only one longitudinal plane passing through the axis

zoroastrian: of or pertaining to Zoroaster or the religion he founded

zygomorphic: capable of division into symmetrical halves by only one longitudinal plane passing through the axis

zimbabwean: of or relating to or characteristic of Zimbabwe or its people

zoological: concerning the study of animals and their classification and properties; of or relating to animals or animal groups

zygodactyl: (of bird feet) having the first and fourth toes directed backward the second and third forward

zolaesque: in the manner of Emile Zola

zygomatic: of or relating to the cheek region of the face

zymolytic: of or relating to or causing fermentation