Interesting Categories for the Adjectives Starting with V

The Interesting Adjectives category consists of adjectives which can make the speech or text more enjoyable to read or hear. This article also has Positive Adjectives and Negative Adjectives lists which are composed of words that describe the favorable and unfavorable qualities of a person, event or place.

Additionally, a Heroic Adjectives category is also included which lists out some of the descriptive words that are commonly used to refer to a hero/heroine, as well as their heroic deeds. For the Sporty Adjectives list, the adjectives included are those which describe an athletic or sporty person.

Adjectives that Start with V

vagabond: having no settled home

vagrant: characteristic of, relating to, or living the life of a vagrant

vague: of uncertain, indefinite, or unclear character or meaning

venturesome: willing to take risks or embark on difficult or unusual courses of action

voluble: characterized by a ready and continuous flow of words

variable: not consistent or having a fixed pattern; liable to change

varied: incorporating a number of different types or elements; showing variation or variety

verdant: green with grass or other rich vegetation

vibrant: full of energy and enthusiasm

virgin: not yet touched, used, or exploited

vain: having or showing an excessively high opinion of one’s appearance, abilities, or worth

vengeful: seeking to harm someone in return for a perceived injury

villainous: relating to, constituting, or guilty of wicked or criminal behavior

voiceless: lacking the power or right to express an opinion or exert control over affairs

valueless: having no value; worthless

vexatious: causing or tending to cause annoyance, frustration, or worry

vindictive: having or showing a strong or unreasoning desire for revenge

violent: using or involving physical force intended to hurt, damage, or kill someone or something

volatile: liable to change rapidly and unpredictably, especially for the worse

venerable: accorded a great deal of respect, especially because of age, wisdom, or character

virile: having strength, energy, and a strong sex drive

versatile: able to adapt or be adapted to many different functions or activities

victorious: having won a victory; triumphant

velvety: having the character of velvet as in being soft, smooth, thick, or richly hued

vivacious: (especially of a woman) attractively lively and animated

volcanic: (especially of a feeling or emotion) bursting out or liable to burst out violently 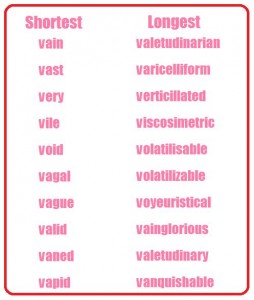 vain:having or showing an excessively high opinion of one’s appearance, abilities, or worth

vast: unusually great in size or amount or degree or especially extent or scope

vagal: of or relating to the vagus nerve

vague: not clearly expressed or understood

vapid: lacking significance or liveliness or spirit or zest

varicelliform: resembling the rash of chickenpox

verticillated: forming one or more whorls (especially a whorl of leaves around a stem)

viscosimetric: of or relating to the measurement of viscosity

volatilisable: (used of substances) capable of being volatilized

volatilizable: (used of substances) capable of being volatilized

voyeuristical: of or relating to voyeurs or voyeurism

valetudinary: of or relating to or characteristic of a person who is a valetudinarian

vanquishable: susceptible to being defeated