Interesting Categories for the Adjectives Starting with U

For the Heroic Adjectives list, the adjectives included are those which are suitable to describe heroic acts or a hero/heroine. Moreover, the Sporty Adjectives category is composed of descriptive words that adequately modify a person who is physically active or is considered athletic.

Aside from the mentioned categories, this article also includes a Romantic Adjectives list, which consists of descriptive words that are used to convey affection or describe a romantic partner. Lastly, the Shortest/ Longest Adjectives lists include adjectives with the least and the most number of characters.

Adjectives that Start with U

unambiguous: not open to more than one interpretation

unbidden: without having been commanded or invited

unconscionable: not right or reasonable

unfathomable: incapable of being fully explored or understood

–          her gray eyes were dark with some unfathomable emotion

unarmed: not equipped with or carrying weapons

unbiased: showing no prejudice for or against something; impartial

understanding: sympathetically aware of other people’s feelings; tolerant and forgiving

–          people expect their doctor to be understanding

unhurried: moving, acting, or taking place without haste or urgency

unimpeachable: not able to be doubted, questioned, or criticized; entirely trustworthy

unruffled: not agitated or disturbed; calm

unbroken: not interrupted or disturbed; continuous

unceasing: not coming to an end; continuous

undeniable: unable to be denied or disputed

understandable: to be expected; natural, reasonable, or forgivable

–          a quiet weekend of undisturbed tranquillity

unbelievable: so great or extreme as to be difficult to believe; extraordinary

uncluttered: not having or impeded by too many objects, details, or elements

underground:situated beneath the surface of the ground

underwater: situated, occurring, or done beneath the surface of the water

unique: being the only one of its kind; unlike anything else

unbecoming: not fitting or appropriate; unseemly

unavailing: achieving little or nothing; ineffective

unbearable: not able to be endured or tolerated

underhanded: acting or done in a secret or dishonest way

–          an underhanded method of snatching clients from rivals

unfortunate: having or marked by bad fortune; unlucky

unattractive: not pleasing or appealing to look at

uncanny: strange or mysterious, especially in an unsettling way

–          the company was fined for operating in unclean premises

undesirable: not wanted or desirable because harmful, objectionable, or unpleasant

unproductive: not producing or able to produce large amounts of goods, crops, or other commodities

untidy: not arranged neatly and in order

undaunted: not intimidated or discouraged by difficulty, danger, or disappointment

unpretentious: not attempting to impress others with an appearance of greater importance, talent, or culture than is actually possessed

unscathed: without suffering any injury, damage, or harm

unselfish: willing to put the needs or wishes of others before one’s own

unyielding: unlikely to be swayed; resolute

unequaled: superior to all others in performance or extent

unexpected: not expected or regarded as likely to happen

unmatched: not matched or equaled

unquestionable: not able to be disputed or doubted

useful: able to be used for a practical purpose or in several ways

unadulterated: pure; not mixed or diluted with any different or extra elements; complete and absolute

unconditional: not subject to any conditions

undisguised: not disguised or concealed; open

up: out of bed

ult: in or of the month preceding the present one

uric: in or relating to or obtained from urine

used: previously used or owned by another

ulnar: relating to or near the ulna

ultra: (used of opinions and actions) far beyond the norm

umber: of the color of any of various natural brown earth pigments

unary: consisting of or involving a single element or component 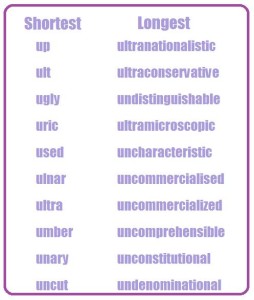 undistinguishable: not capable of being distinguished or differentiated

uncharacteristic: distinctive and not typical

undenominational: not bound or devoted to the promotion of a particular denomination