Interesting Categories for the Adjectives Starting with T

In this article, the adjectives presented all start with the letters T. Moreover, the meaning of the word and an example regarding how to use the adjective are also provided.

Adjectives that Start with T

telling: having a striking or revealing effect; significant

thorough: performed or written with great care and completeness

thrilling: cause (someone) to have a sudden feeling of excitement and pleasure

timely: done or occurring at a favorable or useful time; opportune

temperate: of, relating to, or denoting a region or climate characterized by mild temperatures

tenable: able to be held or used

tidy: arranged neatly and in order

towering: extremely tall, especially in comparison with the surroundings

tardy: delaying or delayed beyond the right or expected time; late

tasteless: considered to be lacking in aesthetic judgment or to offend against what is regarded as appropriate behavior

tense: unable to relax because of nervousness, anxiety, or stimulation

thoughtless: not showing consideration for the needs of other people

tedious: too long, slow, or dull: tiresome or monotonous

thankless: difficult or unpleasant and not likely to bring one pleasure or the appreciation of others

tiresome: causing one to feel bored or annoyed

tawdry: showy but cheap and of poor quality

timeworn: damaged or impaired, or made less striking or attractive, as a result of age or much use

turbulent: characterized by conflict, disorder, or confusion; not controlled or calm

transparent: having thoughts, feelings, or motives that are easily perceived

trenchant: vigorous or incisive in expression or style

talented: having a natural aptitude or skill for something

tall: of great or more than average height, especially (with reference to an object) relative to width

triumphant: having won a battle or contest; victorious

tricky:  requiring care and skill because difficult or awkward

thoughtful: showing consideration for the needs of other people

timeless: not affected by the passage of time or changes in fashion

trustworthy: able to be relied on as honest or truthful

tan: of a light yellowish-brown color

ten: being one more than nine

tod: alone and on your own

top: situated at the top or highest position

two: being one more than one

tabu: excluded from use or mention

tall: too improbable to admit of belief; impressively difficult

tame: very docile; brought from wildness into a domesticated state 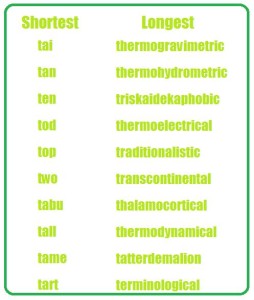 traditionalistic: adhering to tradition, especially in cultural or religious practices

transcontinental: spanning or crossing or on the farther side of a continent

thalamocortical: relating to or connecting the cortex and thalamus

terminological: of or concerning terminology