Interesting Categories for the Adjectives Starting with P

Adjectives that Start with P

painstaking: done with or employing great care and thoroughness.

palliative: relieving pain or alleviating a problem without dealing with the underlying cause.

short-term, palliative measures had been taken

palpable: able to be touched or felt.

the palpable bump at the bridge of the nose

partisan: prejudiced in favor of a particular cause

patient: able to accept or tolerate delays, problems, or suffering without becoming annoyed or anxious

they were famed as an industrious, peaceable, practical people

penitent: feeling or showing sorrow and regret for having done wrong; repentant.

proficient: competent or skilled in doing or using something.

I was proficient at my job.

paramount: more important than anything else; supreme.

the interests of the child are of paramount importance

purposeful: having a useful purpose

persuasive: good at persuading someone to do or believe something through reasoning

passable: clear of obstacles and able to be traveled along or on

the road was passable with care

permissive: allowing or characterized by great freedom of behavior

picturesque: visually attractive, especially in a quaint or pretty style

pallid: (of a person’s face) pale, typically because of poor health

parsimonious: unwilling to spend money or use resources; stingy or frugal

parsimonious New Hampshire voters, who have a phobia about taxes

passive: accepting or allowing what happens or what others do, without active response or resistance

the women were portrayed as passive victims

parched: dried out with heat

persistent: continuing firmly or obstinately in a course of action in spite of difficulty or opposition

is persistent efforts to save the country

philanthropic: seeking to promote the welfare of others, especially by donating money to good causes; generous and benevolent

polite: having or showing behavior that is respectful and considerate of other people

admired because of his polite demeanor

powerful: having great power or strength.

He is considered as one of the most powerful men.

physical: of or relating to the body as opposed to the mind

He always engages in physical activities.

popular: liked, admired, or enjoyed by many people or by a particular person or group

precise: marked by exactness and accuracy of expression or detail

passionate: showing or caused by intense feelings of sexual love

perfect: having all the required or desirable elements, qualities, or characteristics; as good as it is possible to be

petite: having a small and attractively dainty build

she was petite and vivacious

pat: exactly suited to the occasion

pet: preferred above all others and treated with partiality

pop: (of music or art) new and of general appeal (especially among young people)

pro: in favor of (an action or proposal etc.)

paid: marked by the reception of pay

pass: of advancing the ball by throwing it

past: earlier than the present time; no longer current

with pent breath she waited out the meeting 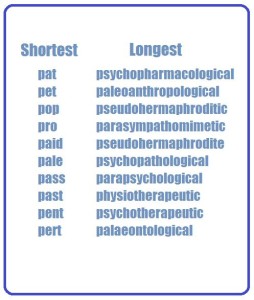 paleoanthropological: of or concerned with the scientific study of human fossils

pseudohermaphroditic: having internal reproductive organs of one sex and external sexual characteristics of the other sex

parasympathomimetic: having an effect similar to that resulting from stimulation of the parasympathetic nervous system

pseudohermaphrodite: having internal reproductive organs of one sex and external sexual characteristics of the other sex

physiotherapeutic: of or relating to or used in physical therapy

palaeontological: of or relating to paleontology

Through this article, you can learn about new adjectives that you can apply in everyday communication or in writing. Furthermore, this article is especially helpful for those who are just beginning to learn about the English language, as well as those who want to enhance their English speaking and writing skills.