Interesting Categories for the Adjectives Starting with N

nascent: just coming into existence and beginning to display signs of future potential.

nauseating: causing or liable to cause a feeling of nausea or disgust; disgusting.

nebulous: in the form of a cloud or haze; hazy.

national: of or relating to a nation; common to or characteristic of a whole nation.

nationwide: extending or reaching throughout the whole nation.

necessary: required to be done, achieved, or present; needed; essential.

–          members are admitted only after they have gained the necessary experience

nonprofit: not making or conducted primarily to make a profit

nonstop: continuing without stopping or pausing.

navigable: (of a waterway or sea) able to be sailed on by ships or boats.

near: located a short distance away.

naive: showing a lack of experience, wisdom, or judgment

nasty: behaving in an unpleasant or spiteful way.

negligent: failing to take proper care in doing something

–          directors have been negligent in the performance of their duties

negligible: so small or unimportant as to be not worth considering; insignificant

noisy: making or given to making a lot of noise

nonsensical: having no meaning; making no sense

narrow: (especially of something that is considerably longer or higher than it is wide) of small width.

–          she lived in a nondescript suburban apartment block

notorious: famous or well known, typically for some bad quality or deed.

noble: having or showing fine personal qualities or high moral principles and ideals

nonbelligerent: not aggressive or engaged in a war or conflict

natural: born with a particular skill, quality, or ability.

neuromuscular: of or relating to nerves and muscles.

nimble: quick and light in movement or action; agile.

nuts: feeling affection or love for someone or something

no: (quantifier) used with either mass nouns or plural count nouns for indicating a complete or almost complete lack or zero quantity of

nee: (meaning literally `born’) used to indicate the maiden or family name of a married woman

neo: (used as a combining form) recent or new

net: conclusive in a process or progression

nth: last or greatest in an indefinitely large series

naif: marked by or showing unaffected simplicity and lack of guile or worldly experience

nary: (used with singular count nouns) colloquial for `not a’ or `not one’ or `never a’

near: located a short distance away 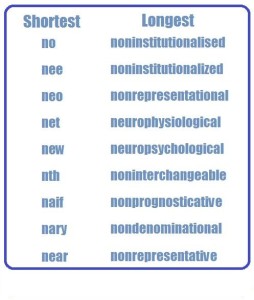 noninstitutionalised: not committed to an institution

noninstitutionalized: not committed to an institution

nonrepresentational: of or relating to a style of art in which objects do not resemble those known in physical nature

noninterchangeable: such that the terms of an expression cannot be interchanged without changing the meaning

–          Designs of superiority and noninferiority trials for binary responses are noninterchangeable.

nondenominational: not restricted to a particular religious denomination

nonrepresentative: not standing for something else

By referring to this article, you will be able to learn how to apply various adjectives in your daily conversations and in writing. Furthermore, you might also learn about words that are unfamiliar to you and enhance your vocabulary.