Interesting Categories for the Adjectives Starting with L

The Heroic Adjectives category include words which are fit to describe a hero/ heroine or heroic acts, while the Sporty Adjectives list is composed of adjectives that are used to modify a person who engages in athletic activities. For the Romantic Adjectives list, the words included are those which are commonly used to express affection and describe a romantic partner. Lastly, the Shortest/ Longest Adjectives include the adjectives with the least and the most number of characters.

All of the descriptive words included in the lists are presented with their definitions. Furthermore, an example on how each adjective is put into use is also provided.

–          a lackadaisical defense left the Spurs adrift in the second half

laodicean: lukewarm or halfhearted, especially with respect to religion or politics

–          lamented the laodicean attitude of his fellow citizens

lexical: of or relating to the words or vocabulary of a language

–          America’s banks no longer look lilliputian in comparison with Japan’s.

learned: having much knowledge acquired by study

lean: thin, especially healthily so; having no superfluous fat

liberal: open to new behavior or opinions and willing to discard traditional values

–          They have more liberal views toward marriage and divorce than some people.

literate: able to read and write.

lasting: enduring or able to endure over a long period of time

leisurely: acting or done at leisure; unhurried or relaxed

lifelong: lasting or remaining in a particular state throughout a person’s life

lively: full of activity and excitement

large: of considerable or relatively great size, extent, or capacity

light: having a considerable or sufficient amount of natural light; not dark

–          The forest is luxuriant and provides home for various species.

languid: weak or faint from illness or fatigue

lazy: unwilling to work or use energy

lewd: crude and offensive in a sexual way

lengthy:  of considerable or unusual length, especially so as to be tedious

libelous: containing or constituting a libel.

lawless: not governed by or obedient to laws; characterized by a lack of civic order

leaky: having a leak or leaks

loud: producing or capable of producing much noise

laureate: deserving or having a special recognition for achievement

legendary: of, described in, or based on legends; remarkable enough to be famous; very well known

lordly: of, characteristic of, or suitable for a lord

long-suffering: having or showing patience in spite of troubles, especially those caused by other people

loyal: giving or showing firm and constant support or allegiance to a person or institution

leading: having great importance, influence, or success; most important

limber: characterized by ease in bending the body; supple; lithe

lively: full of life and energy; active and outgoing

ladylike: appropriate for or typical of a well-bred, decorous woman or girl 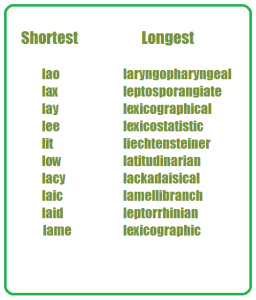 lacy: made of or resembling lace

laic: characteristic of those who are not members of the clergy

laid: set down according to a plan

Lao:  of or relating to a member of the Buddhist people inhabiting the Mekong river in Laos and        Thailand

lax:  lacking in rigor or strictness

lay: not of or from a profession

lee: towards the side away from the wind

low:  filled with melancholy and despondency

–          She was annoyingly lackadaisical and impractical.

laryngopharyngeal: of or relating to the larynx and pharynx

latitudinarian: unwilling to accept authority or dogma (especially in religion)

leptorrhinian: having a long narrow nose

–          A leptorrhinian woman can be attractive if her face is long enough for her nose.

leptosporangiate: (of ferns) having each sporangium formed from a single epidermal cell

lexicostatistic : pertaining to statistical methods used in studying the relations between languages