More Categories for the Adjectives Starting with G

geriatric: of or relating to old people, especially with regard to their health care

germane: relevant to a subject under consideration

generous: showing a readiness to give more of something, as money or time, than is strictly necessary or expected

–      she was alive, which was something to be glad about

good: to be desired or approved of

grand: magnificent and imposing in appearance, size, or style

graphic: of or relating to visual art, especially involving drawing, engraving, or lettering

–      a monthly program was issued gratis

–      the north and south geographic poles

gigantic: of very great size or extent; huge or enormous

global: of or relating to the whole world; worldwide

–      the downturn in the global economy

grassy: of or covered with grass

gangling: tall, thin, and awkward in movements or bearing

–      Polonius is portrayed as a foolish, garrulous old man

gaunt: lean and haggard, especially because of suffering, hunger, or age

greedy: having or showing an intense and selfish desire for something, especially wealth or power

grave: giving cause for alarm; serious

grim: depressing or worrying to consider

gloomy: dark or poorly lit, especially so as to appear depressing or frightening

greasy: covered with or resembling an oily substance

gritty: containing or covered with grit

genteel: polite, refined, or respectable, often in an affected or ostentatious way

godlike: resembling God or a god in qualities such as power, beauty, or benevolence

greatest: of ability, quality, or eminence considerably above the normal or average

glorious: having, worthy of, or bringing fame or admiration

–      the most glorious victory of all time

great: very skilled or capable in a particular area

gymnastic: of or relating to gymnastics

gentle: mild in temperament or behavior; kind or tender

graceful: having or showing grace or elegance

grateful: feeling or showing an appreciation of kindness; thankful

gi: of or relating to the stomach and intestines

gu: of or related to the genital and urinary organs or their functions

gaga: intensely enthusiastic about or preoccupied with

gilt: having the deep slightly brownish color of gold

glib: fluent and voluble but insincere and shallow 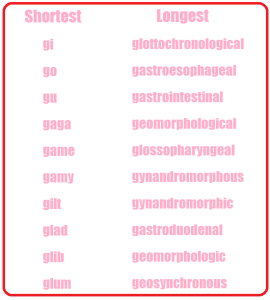 glottochronological: pertaining to the study of the evolution of languages from a common source

gastroesophageal: of or relating to or involving the stomach and esophagus

gastrointestinal: of or relating to the stomach and intestines

–          geomorphological features of the Black Hills

glossopharyngeal: pertaining to the tongue and throat

gynandromorphous: having both male and female morphological characteristics

gynandromorphic: having both male and female morphological characteristics

gastroduodenal: of or relating to the stomach and the duodenum

geosynchronous: of or having an orbit with a fixed period of 24 hours (although the position in the orbit may not be fixed with respect to the earth)