More Categories for the Adjectives Starting with F

Adjectives that Start with F

foolhardy: marked by defiant disregard for danger or consequences

foolproof: not liable to failure

friable: easily broken into small fragments or reduced to powder

furtive: secret and sly or sordid

forgiving: inclined or able to forgive and show mercy

forthright: characterized by directness in manner or speech; without subtlety or evasion

–          The administration is quite forthright in this matter.

fortunate: favored by or involving good luck or fortune; lucky

frank: open, honest, and direct in speech or writing, especially when dealing with unpalatable matters

fateful:controlled or decreed by fate; predetermined

festive: cheerful and jovially celebratory; of or relating to a festival

fancy: elaborate in structure or decoration

fecund: producing or capable of producing an abundance of offspring or new growth; fertile

flowery: full of, resembling, or smelling of flowers

folksy: having the characteristics of traditional culture and customs, especially in a contrived or artificial way

futuristic: having or involving very modern technology or design

forgetful: apt or likely not to remember

frivolous: not having any serious purpose or value

fruitless: failing to achieve the desired results; unproductive or useless

frozen: treated, affected, or crusted over by freezing; subject to long and severe cold

fearless: oblivious of dangers or perils or calmly resolute in facing

formidable: inspiring fear or respect through being impressively large, powerful, intense, or capable

fast: moving or capable of moving at high speed

flexible: bending and snapping back readily without breaking; ready and able to change so as to adapt to different circumstance

frenetic: fast and energetic in a rather wild and uncontrolled way

faithful: marked by fidelity to an original

fervent: having or displaying a passionate intensity

flamboyant: (of a person or their behavior) tending to attract attention because of their exuberance, confidence, and stylishness

fond: having a strong preference or liking for

far: located at a great distance in time or space or degree

fat: having an (over)abundance of flesh

few: a quantifier that can be used with count nouns and is often preceded by `a’; a small but indefinite number

fey: suggestive of an elf in strangeness and otherworldliness

fly: (British informal) not to be deceived or hoodwinked

fain: pleased or willing under the circumstances; obliged

fair: very pleasing to the eye; in accordance with the rules or standards; legitimate

fake: fraudulent; having a misleading appearance 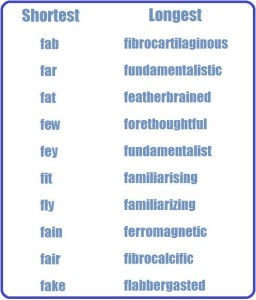 fundamentalistic: of or relating to or characteristic of Protestant fundamentalism or its adherents

featherbrained: lacking seriousness; given to frivolity

forethoughtful: thoughtful of the future

fundamentalist: of or relating to or characteristic of Protestant fundamentalism or its adherents

fibrocalcific: involving or resulting from calcification of fibrous tissue

flabbergasted: as if struck dumb with astonishment and surprise