A More Categories for the Adjectives Starting with C

Adjectives that Start with C

cadaverous: very thin especially from disease or hunger or cold

cantankerous: having a difficult and contrary disposition

capricious: determined by chance or impulse or whim rather than by necessity or reason

–      left us fatigued and crestfallen

carefree: free from anxiety or responsibility

caring: feeling and exhibiting concern and empathy for others

cultured: marked by refinement in taste and manners

climactic: consisting of or causing a climax

concurrent: occurring or operating at the same time

continuous: continuing in time or space without interruption

cultural: denoting or deriving from or distinctive of the ways of living built up by a group of people

cheerful: being full of or promoting cheer; having or showing good spirits

cool: of or at a fairly low temperature

cozy: enjoying or affording comforting warmth and shelter especially in a small space

captious: tending to find and call attention to faults

careless: marked by lack of attention or consideration or forethought or thoroughness

cruel: able or disposed to inflict pain or suffering

cynical: believing the worst of human nature and motives

conspiratorial: relating to or characteristic of conspiracy or conspirators

controversial: marked by or capable of arousing controversy

craggy: having hills and crags

crumbly: easily broken into small fragments or reduced to powder

cursed: deserving a curse; sometimes used as an intensifier

coercive: serving or intended to coerce

combative: having or showing a ready disposition to fight

courageous: possessing or displaying courage; able to face and deal with danger or fear without flinching

competent: adequate, but not outstanding or exceptional

crucial: of extreme importance; vital to the resolution of a crisis

captivating: capturing interest as if by a spell

compassionate: showing or having compassion

cute: attractive in a pretty or endearing way.

cc: being ten more than one hundred ninety

cd: being one hundred more than three hundred

ci: being one more than one hundred

cl: being ten more than one hundred forty

cv: being five more than one hundred

cx: being ten more than one hundred

ccc: being one hundred more than two hundred

clv: being five more than one hundred fifty

clx: being ten more than one hundred fifty

cod: payable by the recipient on delivery 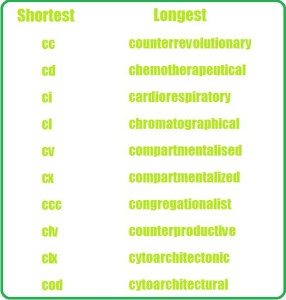 counterrevolutionary: marked by opposition or antipathy to revolution

–          ostracized for his counterrevolutionary tendencies

chemotherapeutical: of or relating to chemotherapy

cardiorespiratory: of or pertaining to or affecting both the heart and the lungs and their functions

compartmentalised: divided up into compartments or categories

–          most sciences have become woefully compartmentalized

compartmentalized: divided up into compartments or categories

counterproductive: tending to hinder the achievement of a goal